angels
​sang to me 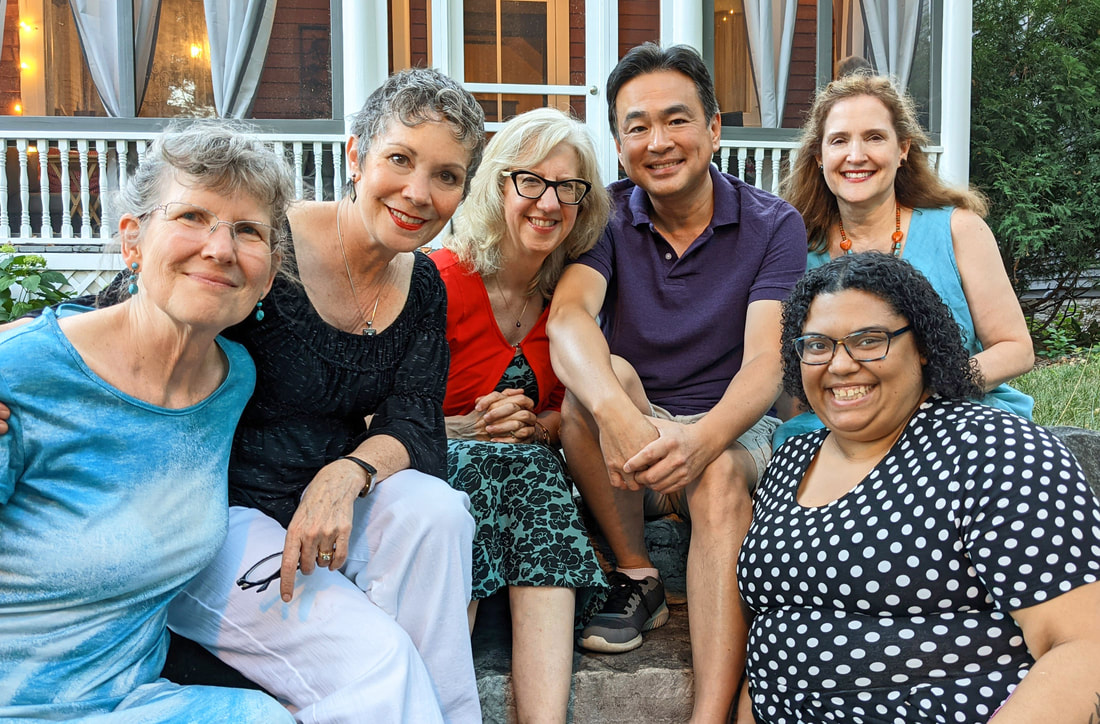 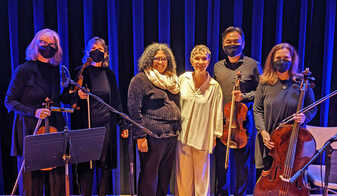 ​After the final recording of Angels Sang to Me

​In the song cycle, Angels Sang to Me, composer AJ Isaacson-Zvidzwa reveals her experiences with mental illness through music, featuring soprano, Maria Jette, and string quartet. AJ’s story is told through poems and writings of past artists who continued to create while mentally ill, including William Blake, Emily Dickinson, Edgar Allan Poe and Hector Berlioz. Instrumental interludes will be interspersed throughout to illustrate the emotional highs and lows of AJ’s journey through bipolar disorder and schizophrenia, touching on fear, confusion, mania, hallucinations, levity, and concluding with a balancing and accepting awareness of one’s illness. The instrumentalists whisper and speak while accompanying the singer, as lyrics and texts draw them through illness towards health. In the process of this work, Angels Sang to Me spreads awareness about mental illness, shows that success with mental illness is possible, and destigmatizes what it means to live with bipolar and schizophrenia.

What's Being Said about "Angels Sang to Me"

“Angels Sang to Me”, for Soprano and String Quartet, is a cleverly written piece with texts that portray the inner thoughts and suffering of artists such as Emily Dickinson and Hector Berlioz, giving the listener a greater understanding of mental illness and how it can relate to creativity.
​-Leslie Shank, violin

​"Angels Sang to Me" is a fascinating musical representation of many artists' emotional angels and demons. Composer AJ Isaacson-Zvidzwa draws on quotes from poets and composers with her evocative score.
​-Brenda Mickens, violin

“Angels Sang to Me” is a fascinating work that explores the world of mental illness through words, sound, and music.
​-Laura Sewell, cello

Great performers, compelling texts and I think you'll be startled by the originality of this new musical voice in our composing community.
-Randall Davidson, composer

The music is beautiful, and frightening, and poignant— scored for voice and string quartet. A fascinating selection of texts, sung (Emily Dickinson poems) and spoken. The quotes by and about well-known composers and poets with mental illness are startling and heart-rending: Clara Schumann describing Robert’s hallucinations, Berlioz describing his own despair, Robert Lowell’s wild and dangerous actions frightening his wife but dismissed as eccentricities of genius by his friends and admirers; and running through it, the composer relates her own terrifying experiences with mental illness.
-Maria Jette, soprano

This work captures both the initial beauty and allure of an onset of an episode before descending into the tragic and dissonant chaos which follows. Haunting and pervasive tones tug empathetic listeners through the experience toward a deeper understanding of the tumultuous experience of living through and despite this illness.
-Rebecca Evans, certified ​peer support specialist 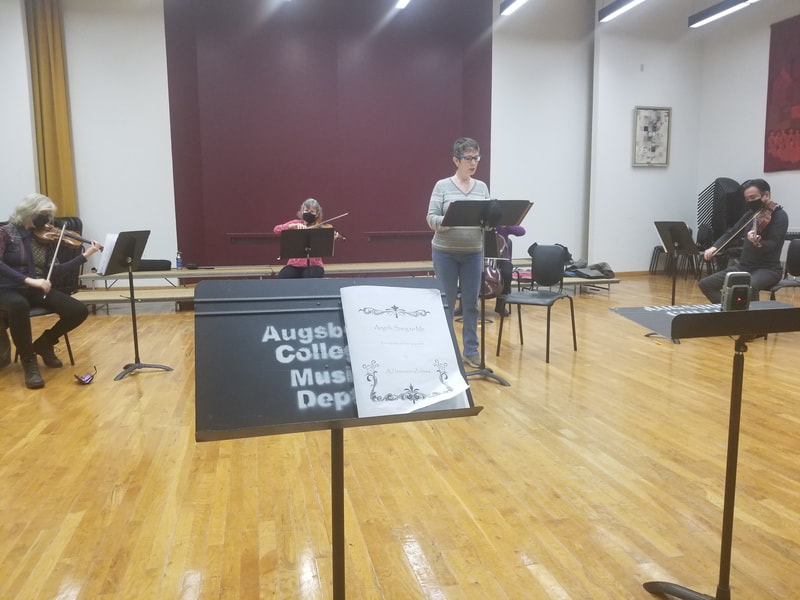 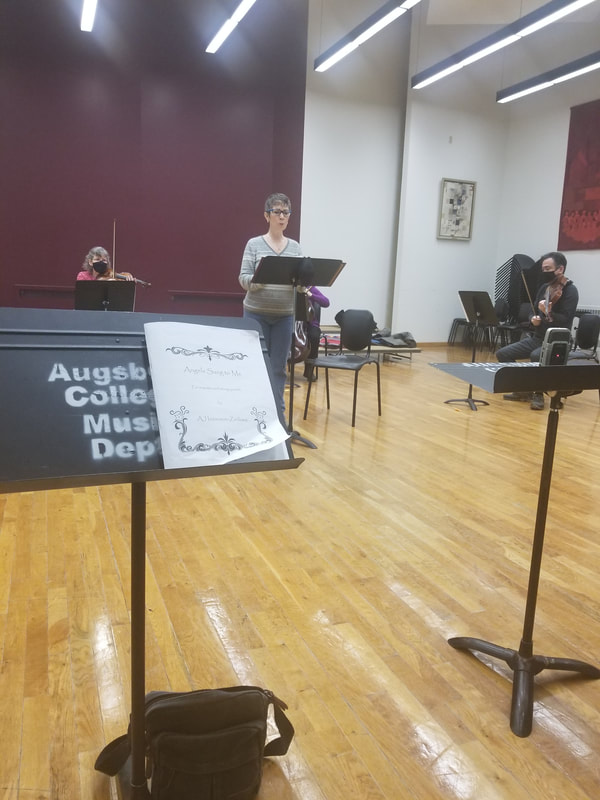 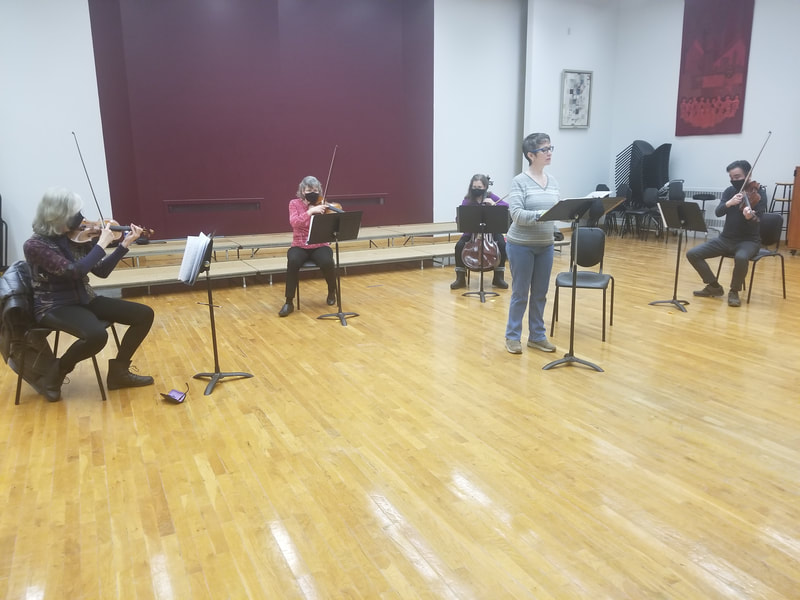 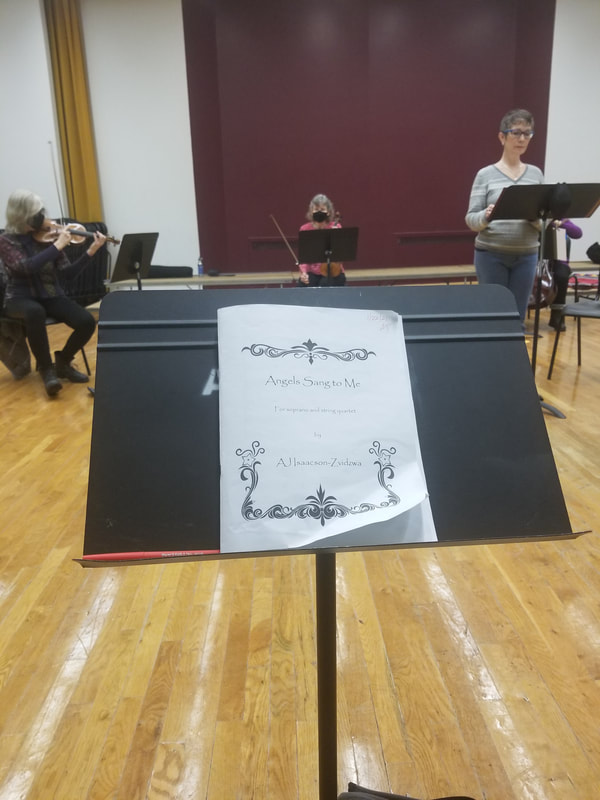 "Angels Sang to Me" is a 19 movement song cycle for soprano and string quartet using texts by Emily Dickinson, Hector Berlioz, Ian Hamilton on Robert Lowell, William Blake, Robert Lowell, Sara Teasdale, Clara Schumann on Robert Schumann, and Edgar Allan Poe.
​
The idea for "Angels Sang to Me" came to AJ as she was reading a poem by Emily Dickinson that struck her as a description of how she experienced hallucinations (Alone I cannot be--, movement 10). She then thought of a book called “Touched with Fire” by psychologist Kay Redfield Jamison that looks at the link between the manic depressive and the artistic temperament (click here to purchase, non affiliate, just a recommended book). The poem and book helped her begin to outline her project. The title "Angels Sang to Me" came from a quotation by Clara Schumann describing Robert's experience: "In the night, not long after we had gone to bed, Robert got up and wrote down a melody which, he said, the Angel's had sung to him."

In looking at the ties between the artistic temperament and the mentally ill, an article in the mental health community posed the question: "[Does] one needs to 'be sick to be creative?' or is it possible to lead a peaceful and pleasant life and still have hopes of being innovative?" Isaacson-Zvidzwa aims to show that it's absolutely possible to have creativity while living a peaceful, pleasant, and medicated life.

The goal of “Angels Sang to Me” is to demonstrate that dealing with mental illness is possible and that one can be creative while on psychiatric medication.  Prior to the introduction of psychiatric medication, 1 in 5 of those with bipolar died by suicide. With medication that number has gone from 20% to as low as 4%. Getting onto the correct combination of medications has not only let AJ achieve stability, but allowed her to rekindle her love for composing in a way she couldn’t when she was in the midst of mental illness.

This work has pushed AJ to explore something dear to her on a much larger scale. She's taking a risk with this work as it’s publicly talking about an issue that still carries a lot of stigma. AJ's trying to speak out against the stereotypes of what it means to be “bipolar” or “schizophrenic.”

AJ is more than her mental illness and, with this project, she will affirm her struggles and victories with bipolar disorder and schizophrenia. 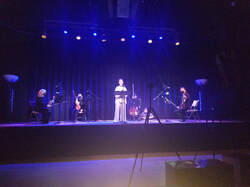 "Composer A.J. Isaacson Zvidzwa began her musical career as many do, by modeling her mother. But few start out wanting to play specifically the viola. When A.J. talked to Phil Nusbaum, Phil said how unusual choosing the viola is."
Interview for KBEM

Check out AJ's interview with Shasa from the Cedar Cultural Center. ​

AJ spoke with Shasa Sartin, The Cedar’s Marketing and Programs Assistant, about how she confronted her diagnosis of schizoaffective disorder, bipolar type; the story behind her first-ever composition; and the joy being a composer brings her.
​
www.thecedar.org/cedar-comms-spotlight-aj?rq=aj%20isaacson%20spotlight